GREEN AMBASSADOR FOR THE CLIMATE IN AFRICA PROGRAM

As part of its "Green Ambassador for Climate in Africa" program, Climate Change Africa Opportunities (CCAO) has created and coordinates this vast pan-African CCAO Network currently bringing together 54 national focal points and 1404 young Green Ambassadors for the climate involved in climate change advocacy and adaptation actions and who works with partners, government institutions and grassroots organizations and indigenous and local communities to implement many climate smart initiatives and influence relevant policies to help to build resilient communities while supporting indigenous and technological initiatives in Africa. 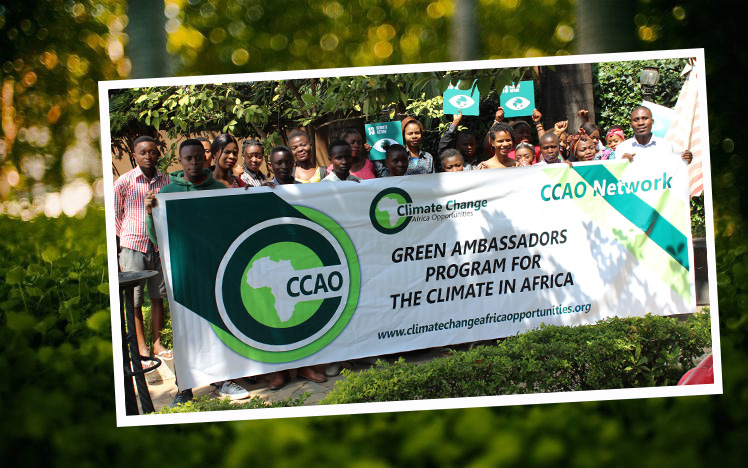 OBJECTIVE OF THE PROGRAM

The "Green Ambassador for the climate in Africa program" is a highly competitive Pan-African program set up by Climate Change Africa Opportunities (CCAO) with the objective of identifying, encouraging, promoting and networking exemplary young climate activists in Africa. In order to support them and encourage them to remain proactive on the global imperative of combating climate change.

LIST OF GREEN AMBASSADORS FOR THE CLIMATE IN AFRICA - CCAO 2020

The Climate Change Africa Opportunities Network (CCAO) is pleased to announce its new 1,084 young Green Climate Ambassadors in Africa. The 2020 Green Ambassadors for Climate in Africa call for candidacy saw the participation of 14,300 young people, including 26.7% of women and girls and 73.3 of men and boys from 54 countries on the African continent.
Click on this link to download the complete list of CCAO Green Ambassadors 2020